Touch Football is returning around the country, with return-to-play dates for community sport announced by every state and territory government.

The Mater health expert who helped develop Touch Football's safe Return-to-Play Protocols says Touch Football comes with a lower risk of transmission due to it being played outdoors and not involving “sustained contact”.

“Evidence also suggests that outdoor activities are a lower-risk setting for COVID-19 than indoor.”

Touch Football’s Return-to-Play Protocols (available at touchfootball.com.au/coronavirus-return-to-play) include guidelines such as sanitising the football before and after games, as well as standard advice such as regular hand hygiene and remaining at home if you feel unwell or are in a high-risk category.

During isolation, Touch Football players have been eager to get back to Touch Football, said Touch Football Australia (TFA) CEO Jamie O’Connor. “We’ve been hearing from our community that taking part in sport is one of the things they’ve missed most during the pandemic.

“They’ve missed being involved in healthy fun with their friends, the connections with the broader community that comes with Touch Football, the routine of having a run around the park in an organised activity, and also the socialising that often comes after a game of Touch.”

O’Connor said Touch Football is a simple sport that anyone can play. “All ages and genders, and different abilities can play together, so you can put a family or work team together. It’s a really welcoming, inclusive community. If you’ve ever thought about seeing what Touch Football’s about, now’s the time to give it a go.”

Go to www.touchfootball.com.au/register-your-team to search for a competition near you and register a team. 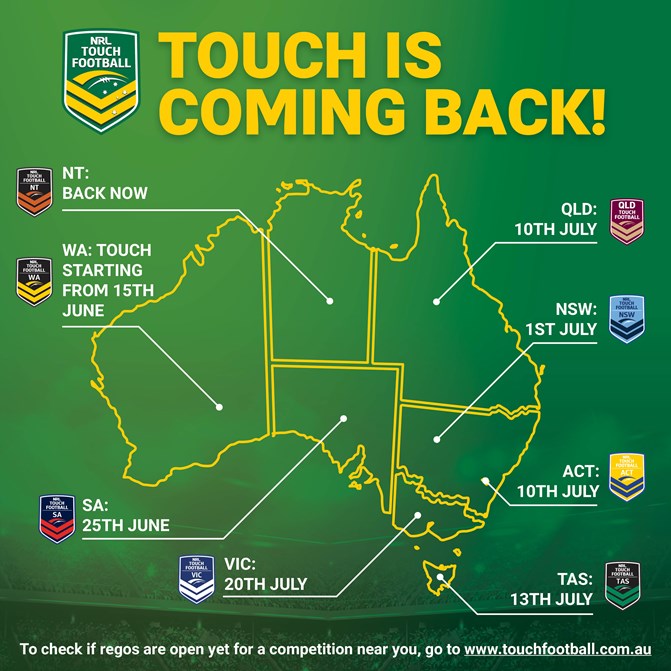